I, of course, think that educators have the hardest job there is. The hours are long and seep over into time for family and time for rest. The stress is palpable - from the second the kids hit the building until the buses get them home - there is an "energy" in a school; I've often called it a "simmering pot." Will it erupt? Or can we effectively keep it just at the boiling point? So, yes, teaching is strenuous and stressful, but at the same time rewarding and wonderful. And I'm glad I've never done anything else! But yesterday I found out that there are other stressful jobs out there. And I was able to watch one in action.

Because of some exciting, and surprising, circumstances, I will be appearing on Good Morning America next week, one day after my 51st birthday. Yesterday the production crew pulled up in front of my house with so much equipment that my neighbor came out and asked, "Whatcha doin'? Making a movie?" It took over an hour to set up the camera, lights, screens, monitors, and other equipment that I can't name. Not only did they have to organize their stuff; they also organized mine - they were moving furniture while picking up pictures and plants to place "in the frame" of the shot. There were so many decisions about details - should this plant go here? Is there too much light coming in the window? My den was unrecognizable quickly, and here's what I couldn't believe: they changed the scenery for every interview. 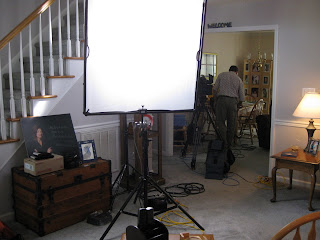 The transformation begins in the den... 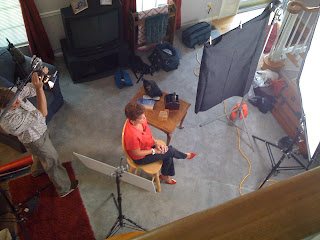 They interviewed my sister first. Then they moved things around and interviewed my mother. Next we changed rooms; my granddaughter Taylor and I made cookies in the kitchen for an "at home" kind of shot. Then they took time to move the entire set to the kitchen - it was my turn to interview. Next, after a few prop changes (moving things from my kitchen that haven't been moved in the fifteen years I've lived in the house), it was my daughter Kelli's turn. Last, we hopped in the car and rode to the site of my elementary school where we got some footage. Finally, we returned home at almost 3:00, having started the process at 9:30 AM! The crew was dripping with sweat (I was, too!) and no one had eaten except to nibble on some muffins and doughnuts I had out when they got there. These guys work hard! 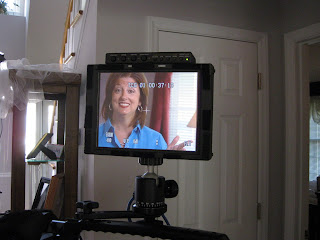 Here I am goofing around for a shot on the monitor.

And there is stress involved. Every noise had to be dealt with. For example, I was surprised to find a set of keys in my refrigerator! I was enlightened to a common routine: they turn the refrigerator off so as not to hear the noise during the interview. They put their keys in the frig so they'll remember to turn it back on (they can't leave without their keys!) The producer also nicely asked my neighbors to postpone their yardwork and home improvement projects until we were done. Unfortunately, due to remnants of Tropical Storm Fay, everyone's grass had grown really high, and everyone needed to mow on a Saturday! But neighbors were happy to cooperate, and it was an exciting adventure.

The story? GMA is trying to reunite me with my first grade teacher (from 45 years ago!) I won't give away the story yet...I'll wait until it airs and then write again. But if you get the chance, watch on Friday morning, September 5th, so that you can see the results of a day's worth of work. The entire piece will probably take about ten minutes! But it was an exciting day for me and the girls in my family!

Here I am on the site of my elementary school (it burned to the ground in 1991) with GMA producer Brian O'Keefe. Last week he was at the Democratic National Convention and the week before that he was interviewing Christina Applegate. While we were filming he asked me to "stare pensively into space." He then told me about the time he asked Cheryl Crowe to do the same thing. Those types of conversations made this entire experience surreal! 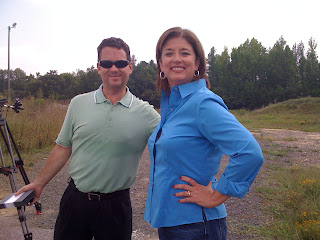 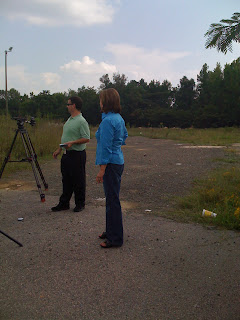 This shot with me in a blue blouse reminds me that I changed clothes three times until they got the color they liked. I started with white, but that's a no-no. I changed to black (to look thinner, of course) but that doesn't work either (black sucks in all the light and pulls it away from the face.) I ended up with this blue one but really like my white blouse better!

Stay tuned for the story of my trip to New York. Will I see Mrs. Warnecke again? (I don't know - they say they haven't found her yet...) Watch if you can! 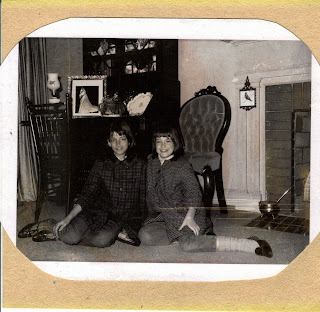 
I have made no secret of the fact that I never planned to become a teacher. That epiphany hit me around my sophomore year of college. Up until that point I was busy trying to hone my cheerleading skills so that I could travel to Dallas and audition to wear a vest with fringe. My sister, though, now she's another story.

Lisa had one of those horrid first grade teachers that make children cry when they wake up in the morning; they don't want to go to school! Among other things, Lisa, an extremely left-handed left-hander, was made to write with her right hand - and was ridiculed when she tried otherwise. (She is now a fifty-year-old left-hander; the teacher did not win this one!) After many complaints for various reasons (I remember my mother heading to the school on more than one occasion to talk to the principal), Miss White left the building. Enter Miss Kilpatrick. She was so lovable that after a couple of years the principal married her. But she also had an impact on my sister: for more years than I can recall, Lisa has wanted to be a teacher.

While I was being scolded by my daddy for doing cheers in front of the one television set in the house, Lisa was lining up her baby dolls to play "Miss Kilpatrick." Whenever I decided to play, too, I was always Miss White, and the baby dolls hated me. It was clear that my sister would become a teacher long before I even had a clue as to my career aspirations.

But as fate would have it, Lisa didn't become a teacher; I did. Although she took course after course in early childhood education, it wasn't to be. Instead she married her high school sweetheart and delivered early, under very scary circumstances, my nephew Cole. Her life took a turn here, and she became the epitome of stay-at-home mom, although she was never at home. Her minivan had about 200,000 miles on it when she finally got rid of it last year, Cole's freshman year in college. Between his birth and college entrance, Lisa was soccer mom and school volunteer, fundraising and answering phones for thirteen years. There were some babies that weren't to be during that time, too...sad circumstances that are still very difficult for her to talk about.

But fast forward to a happier time. Lisa has started her new (and first) teaching job. She will be a preschool teacher in charge of a class of four-year-olds. I just hung up the phone after a conversation with her about the contents of a first day letter to parents. And last week we talked about curriculum. She said things like, "I just want to get on the floor with them and play and learn," and "They're just like sponges at this age. I want to teach them everything!"

They say when one door closes, another one opens. My classroom door is closed this year as I participate in my Teacher of the Year duties. But Lisa's is open. And just three months before her 50th birthday, "Miss Kilpatrick" will finally be in class.

Good luck, Lisa. I've spent my entire career thinking you should take my place. And now you are. Line up those dolls and have a blast! The best is yet to come... 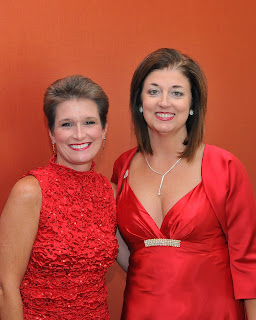 Here we are before the North Carolina Teacher of the Year banquet. See...she's still cute! 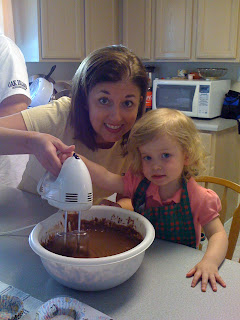 My favorite tiny person in the world is named Taylor. Taylorbug, as she's known to her family, has been a joy ever since she was delivered by my stepdaughter in March of 2006. Although I'm not biologically related to her, we have had a strong connection since those first few nights when I walked the floor with her so her parents could get some sleep. As she grew, it was apparent that she would be a mild tempered child, very easy-going and loving, and just entertaining to be around. At her first birthday party, she sat in the floor (she had not taken an interest in walking at the time) and looked around the room at other children like what are you doing? why are you loud? why are you running around? Taylor preferred always to sit quietly, take it all in, and watch the world around her...just happen.
Taylor's two now, and now, she is what's happening. Rarely still for long, she loves to play pretend - she'll take your order just like a trained waitress, she'll shop and use her imaginary debit card, and she'll march in a room and announce, "I have to check my email!"
Actually, Taylor's almost 2 1/2...which means one thing. She's about to start preschool. Her parents have prepared her for this new adventure in her life; basically they've been talking about it for several months. Back last Christmas, someone could ask, "Taylor, when are you going to big girl school?" She would politely answer, "In August." She would talk about how excited she was to go to school like her neighbor Haley. She would chatter about making new friends. I bought her a little tshirt that says, "What happens in preschool stays in preschool," and she was excited to wear it.
But last week, the wind changed direction a little bit. "Taylorbug," I said. "Are you ready for big girl school?"
"No," she answered. "I not going."
"Yes, you are," I said. "It's August. Time to go to school."
"No, I not going now," she answered. "I go in a little bit."
Since it seems that Taylor is now feeling some reservations about becoming a student, her mom has been pumping her up. One of her first ideas was to tell Taylor her new teacher's name - Nicole. That should be easy. Taylor has an Aunt Nicole. She calls her "NicNac."
Erin says, "Taylor, your new teacher's name is Miss Nicole." Taylor replies "NicNac!"
Hmmm. Erin tries again. "You can call her Miss Utley." Taylor responds, "Miss Ugly."
Oh my.
Nevertheless, my favorite little person will start her school life two weeks from today. She will never be the same. And neither will we.
Please take care of Taylorbug, Miss NicNac Ugly.
Nana's little girl is growing up...