The Pond of Violence 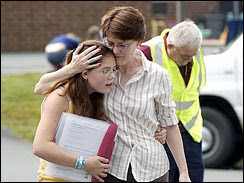 We all believe school shootings happen somewhere else. But I believe that kids who grow up and become capable of being school shooters are everywhere, maybe even in our own classes - misfits some call them, those who are bullied or feel out of place. Those who, like Alvaro Rafael Castillo, grow up and want the notoriety of shooting up a school...those who don't realize the impact, like those proverbial ripples in a pond, that their actions have on a community. 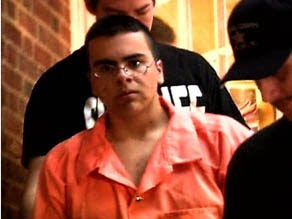 It was the fourth day of school on August 30, 2006. We were still learning our students' names and working to get procedures in place on that day. I walked out of the library and immediately noticed that students were running, full speed, down a nearby hallway. One of them yelled, "Run!" Before I had time to react, perhaps reprimand them for their behavior, the intercom alarm sounded and I heard, "This is a lockdown." At first I thought it was a drill. I turned and walked back into the library for the "practice lockdown." But soon the commotion...the administrators' walkie talkies popping back and forth in the halls, the look of controlled panic as they checked classroom doors...told me that this was not a drill.
I got down behind a bookshelf, along with the other teachers in the room, and called my husband on my cell phone. Since he is a former police officer and now works in law enforcement training, I knew he could get information to me, while I waited, shaking and wondering why we were barricaded between those bookshelves. Soon he called back and said two words I've never forgotten: "Shots fired." He told me that the dispatcher thought someone was firing a rifle into the air in the adjacent high school's parking lot, but that there was a great deal of confusion and they were still investigating.
Meanwhile, the 911 calls were flooding in while we continued to wait. Luckily, there were heroes that day. My school's current resource officer and a retired highway patrolman were able to secure the school shooter as his gun malfunctioned. Soon the administrators came in and told us that it was over. But I was hesitant to believe them. I had seen the video footage of Columbine. We all had.
News came in bits and pieces. A former student, 19 years old, had driven a van full of weapons and explosives into the student parking lot, fired a rifle up into the air, and then began firing into the school cafeteria. One student was shot; another was injured by flying glass. No Columbine here, but devastating just the same.

As he was being led away, Alvaro Castillo told our school resource officer, "I sacrificed him." The deputy asked, "Who?" He answered proudly, "My father."

Deputies found Castillo's father at his home, shot five times in the head and once in the shoulder. Days later police would receive a videotape: Castillo's ramblings that he taped and mailed between murdering his father and traveling to the school to attempt to carry out his plan.
That afternoon, as the news traveled like wildfire across the community, parents began rushing to the schools. I can only imagine their alarm when they found the road to the middle and high schools cordoned off with crime scene tape. We were instructed to lead our students to school buses in the back of the school and ride up the road to nearby tennis courts where we were to reunite students with their parents. I'll never forget the terrified children on that bus - "But what if I go to the tennis courts but my mama goes to the school?" I had to reassure children, who had been sixth graders for only four days, that their parents weren't allowed to drive up to the school...that they would be at those courts for sure.
I almost broke down looking out of the school bus windows and seeing the looks of sheer terror on the parents' faces as we approached the tennis courts. Yes, the danger was over. But none of us felt safe...teachers, students, parents...we were all changed by the events of that day. I remember looking over my shoulder into the woods and thinking What if there were more of them? What if he didn't act alone? What if someone starts shooting into this crowd of kids? The "what-ifs" kept me shaking as I continued to match each child to a parent.
Later, as I left the school at dusk, and drove down the road, a road that on the other end was closed to incoming traffic, I saw hundreds of parents waiting in a church parking lot for their children to come out of the high school. I saw adults trying to sneak across the crime scene tape and get to their children. I saw tears, I saw anger and frustration, and I saw police officers trying to keep everything under control. Then I cried all the way home.
The next morning our students wanted to talk. They knew the shooter...or they knew the victim...the shooter's sister went to Tyler's church...it went on and on. Too close. Just too close to home. We wrote Get Well cards for the victim. It helped our students feel as if they were doing something.

On the one year anniversary of the school shooting, a MySpace hoax declared that someone was planning another school shooting "to finish what was started a year ago." My student Brittany said, "I brought snacks and color books and puzzles in my backpack...just in case we go on lockdown...we'll have something to do." I walked around the classroom looking at student work and found Tiffany doodling on her paper: "I don't want to die. I don't want to die..." Students walked the halls, grabbing each other and repeating, "If I die, I love you, if I die I love you..." over and over. I watched four girls, sitting in four different sections of the cafeteria, eat lunch with tears streaming down their faces. Later, Jonathan attempted to barricade the classroom door using a yard stick.

Today I sat in a restaurant at lunch on our teacher workday with many of the teachers who were side-by-side during the lockdown that day. We looked across the street to the courthouse where Alvaro Rafael Castillo's verdict would be decided later in the afternoon, and we looked across the restaurant at Castillo's mother and sister, trying to keep their heads up during what must be a living hell for them. They've lost their husband and father and are about to lose their son and brother to jail for a lifetime. Ripples.

Other ripples include those sixth graders who are now entering high school themselves this month. They remember that fateful day when they lost their innocence, their sense of safety, and their trust of the world.

Alvaro Castillo will spend his life in jail. The rest of us are still out here, hoping to never experience this kind of fear again while at the same time feeling a gradual sense of security as time goes on.

And next week when school starts, three years after that scary day, I wonder if Brittany will pack some snacks in her backpack for high school. I bet she will.
Posted by Cindi Rigsbee at 8/21/2009 6 comments:

It's the Most Wonderful Time of the Year...

No, not Christmas...Back to School! I borrowed that song lyric from a Back to School commercial. The father is spinning around on a shopping cart, and the kids look like they're walking the Green Mile. But, seriously, why the doldrums?

This IS the most wonderful time of the year!
I've spent the past few weeks hearing others lamenting: "Where did the summer go?" And, granted - teachers' time of reflection and planning for a new year is running out. But just think...soon it will be the proverbial First Day of School, and I can't wait!
Who's gonna miss the sweltering heat, bored and restless children, the vacations that end up being so much work...parents have to go back to work to get some rest?
Here's what I love - shiny, sparkling children in starch white sneakers carrying bookbags full of school supplies.
I also love seeing my dearest friends in the world, those teachers who stand side-by-side at the copier with me, the ones who really get me and know why there are nights I toss and turn because of a child.
I love my principal's mantras - "Once a Grizzly; Always a Grizzly" and "I love each and every one of you" (on the announcements every morning.)
I love the Pledge of Allegiance and the students who walk in a line and the hugs and waves.
And I love that my school sits on land that was full of strawberry and blueberry fields years ago...so we can get by with acting fruity around our halls.
I love that my school is a family...from the custodians to the clerical staff to the teachers to the administrators. We celebrate together and mourn together. We present a united front to our students who know that we are in it together, for them.
I love the first day of school when shaky sixth graders open the car door and try to be brave. I yell at them and dance around, "Welcome to the first day of school! Kiss your mama and thank her for all those school supplies! Yes, you! Go ahead! Love you, Mama! Have a great day! Now get in there and feed your hungry mind with knowledge!" And I love that the look of fear eventually turns to shock, then disbelief, then comfort...all because a crazy teacher has gone nuts in the car rider line.
Yea, I can't wait for the first day of school...and the first school lunch...and the first football game...and the first school dance.
I'm gonna soak it up and live in every moment...because...soon...it will be summer.
Posted by Cindi Rigsbee at 8/09/2009 4 comments: