I used to proclaim that Halloween was my least favorite holiday. First, as a single parent of young children, the celebration was yet another thing I did alone, from costume gathering to trick-or-treating to stomach soothing after too much sugar ingesting.

Also, as a young mother, it seemed to me that there was an unspoken competition when it came to putting costumes together. If I dared to show up to a pre-school party with my kids decked out in pre-fab costumes (some type of vinyl body cover and a plastic mask so popular in the 80's) there would be looks of pity and then whispers as one-by-one the other moms would shake their heads at my kids and then walk away, dragging their child-model in a handsewn costume with them. I'm not much of a competitor when it comes to things I don't know how to do. I decided then to hate Halloween and all the tricks and treats that went with it.

But perhaps the biggest reason I began to dread the orange holiday as soon as the first leaf yellowed is obvious - I TEACH MIDDLE SCHOOL! Are you kidding me? It seems my fate was incredibly twisted. 11-13 year olds are unteachable at Halloween! Right up there with Valentine's Day and Winter Break, the days surrounding that ghastly day have always been difficult. Candy gathered in the 'hood the night before means candy in the school the day after. And kids aren't even sneaky about it! A question about a character in a story was once drowned out by an across-the-classroom trade: "I'll give you my candy corn for your malted milk balls." Let's just say the rest of the class missed the "malted milk" part, and it took me the remainder of the period to settle them down.

But one year someone talked me into participating in our school-wide Halloween celebration. I resisted, but then she brought me the costume. Our school mascot was the Red Devils (since changed to Cardinals due to the hellish nature of the name), and the costume was a bright red, lycra unitard with matching headband/horns and a tail. It was so beautiful I couldn't resist. It looked like this, only sans the flames and wings: 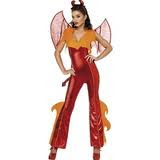 There was a contest - one money prize for a teacher and one for a student. And we wore our costumes to school on Halloween Day. I absolutely cannot believe that I wore that skin-tight outfit to school. Yes, I was a 30-year-old very skinny teacher at the time. But STILL! What were my 7th graders thinking?

I tell you what they were thinking...that their teacher won $50 for the best costume! From then on, I was hooked. Halloween is awesome!! I even began to incorporate Halloween into our classroom activities. The students love our Fright Fair project; they all write scary stories, and then they're assigned projects that match their interests and skills. Some kids design, make, and deliver the invitations. Others design and then decorate the room.

On Halloween Day teachers come to hear story readings. The room is dark except for one small light in the middle of a story-telling circle and the orange lights that are weaved through the spiderwebs hanging on the walls and the whiteboard. Carrot cake is served to the visitors and a ghoulish time is had by all.

Last night as I sat on a hayride and watched my granddaughter (Cinderella) treat-or-treat, I thought Halloween is my favorite holiday!

To a Farmer Dying Young (with thanks to A.E. Housman)

...Today, the road all runners come,
Shoulder-high to bring you home
And set you at your threshold down,
Townsman of a stiller town.
Smart lad, to slip betimes away
From fields where glory does not stay,
And early though the laurel grows
It withers quicker than the rose.
Eyes the shady night has shut
Cannot see the record cut
And silence sounds no worse than cheers
After earth has stopped the ears...

excerpt from "To An Athlete Dying Young"
A.E. Housman

I met him when we were both college freshmen. We graduated high school the same year in towns eight miles apart, and he was the kind of person who immediately made others feel they'd always known him. The freshman year is when the circle of friends widens - high school friends of dormmates come to visit, and soon the world is bigger and better. Such it was with Rob.
I was reading Housman poems in Freshman English back then, picking them apart, every word holding more meaning than a nineteen-year-old would originally think. I worked at learning how to get inside the mind of a poet...while Rob was across campus, learning how to breed cattle. Animal Husbandry he called his major. This city girl had never heard of it.
One weekend the future farmer took me to his family's farm. So many cows in one place! It was a dairy farm then, and Rob called me over to see the special cow, being milked just at that time. He said, "Look, this cow has a square hole." Just as I bent over to look at the hole, I got a face full of fresh milk. He laughed himself silly over that one, although I'm sure he'd pulled that trick thousands of times.
Later that afternoon, he took me for a ride through the country on his motorcycle, my first ride out in the open air like that. I was reminded of an Anne Morrow Lindbergh book I had recently read. She described her first airplane flight with her future husband, Charles. She talked about feeling so free, seeing everything from a different perspective...with the wind in her hair.
That's how that ride felt to me...and that day on the farm. I had a renewed perspective, one altogether different the next day when I poured milk on my cereal.
The years went by, like that wind on that day, and Rob and I went on with our lives, our marriages, and our families. But Rob Hogan taught me the meaning of simpler things, the love of farm animals, and what being kind to people is all about. I've seen him a couple of times over the years. We've laughed at how far we've come - with ever-growing families and responsibilities.
But yesterday when he died, I felt like we were still there - nineteen years old with our lives before us. To me, Rob will always be that college kid with the beautiful smile, even though now he's somewhere in a dreamy pasture, playing the square hole joke on angels.
Posted by Cindi Rigsbee at 10/09/2010 2 comments: