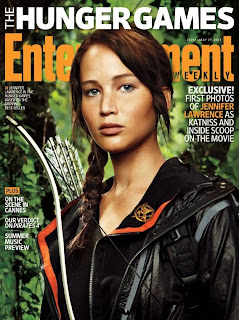 'Tis the season: folks everywhere are donning fashionable gowns and moving the tassel from right to left. That moment - when the graduating class of 2011 is introduced - the future will lay ahead for the graduates, the veritable "rest of their lives" will be upon them.

My own nephew became a college graduate yesterday, and I was asked to represent the family by providing some remarks to a gathering on Fraternity Row. I was even given a prompt: "Tell the Sigma Nu brothers what they need to know for the future."

Oh, my. That was a tall order. I don't even know what I need to know for my future. How could I place myself back at 22 years old and find words of wisdom?

But that's exactly what I did: I thought about my own graduation from the very same university 32 years ago, and asked myself what I wish I had been told back then.

And after enjoying the huge feast prepared by Big Sam, the Sigma Nu cook, here's what I said:

Finding eloquent words for a group of brilliant young gentlemen like yourselves shouldn't be difficult. Others out there have shared words of inspiration, great words that we all know - Tim McGraw will tell you to "live like you're dying." Leann Womack hopes "you dance." Even John Mayer will tell you "there's no such thing as the real world" as he's running through the halls of his high school.

These are all great messages, but mine's a little different. I have three words for you: Don't Get Comfortable.

I had a dream once...to be a Dallas Cowboy cheerleader. It never happened. And as I look back, I realize the problem: I never went to Dallas.

Evidently, you actually have to go there. The Dallas Cowboy Cheerleader Fairy did not come to North Carolina to recruit me. She did not show up on my porch and tap me with a wand, leaving me in tassels and boots.

I had played it safe and stayed home where I was comfortable.

Don't get comfortable. Be a risk-taker. Push yourself beyond what you think your boundaries are. Step out of the safe zone. Be innovative and creative. Don't let complacency rule your life.

I don't want you to look back in 32 years and wonder why you were, um, never a Dallas Cowboy cheerleader. Whatever your goal is, go for it! Move mountains to make your dreams happen. Do whatever it takes.

I'm not sure if my words hit their mark with the young brothers of Sigma Nu, but one of the fathers in the audience said to me later, "Hey, uh, Dallas is still there. It's never too late." 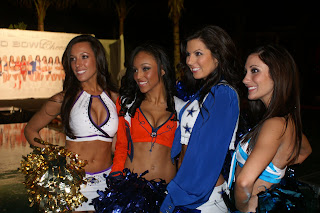 My daughter, an NFL cheerleader for the Carolina Panthers, is on the far right, beside the Dallas Cowboy cheerleader, at the NFL Pro Bowl in January 2010.
Posted by Cindi Rigsbee at 5/06/2011 6 comments: