I grew up hearing those words - "that's the way it is" - as the CBS Evening News ended each night. Walter Cronkite's soothing voice would tell my parents what had happened that day, while this little skinny girl tried to stay out of the way of the television even though the path to anywhere in the entire house meant walking right in front of it. I heard that voice describe the assassinations of John F. Kennedy and Dr. Martin Luther King, Jr. And I heard that voice give play-by-play of numerous episodes of space travel. During Walter Cronkite's last newscast, my college roommate and I made sure to tune in, just to hear him say those words one last time.

I was reminded of that this week as I listened to my principal do the afternoon announcements just before he walked out of the school to head to another educational adventure. I wrote about my principal's decision to accept another position and lamented on the emotions my colleagues and I were feeling. And the month he remained in the school after he shared his decision to leave was, as I heard someone describe it, the longest goodbye ever.

We wrote him notes, brought him gifts, emailed how much he meant to us, talked to him nonstop about his impact on our school (and on us, personally); we threw him a huge party, complete with skits and interpretive dances and PowerPoint presentations with pictures of our boss and funny captions. We thought we were ready. I thought I was ready.

But then those last announcements came on that last day, and they sounded so normal, so this-is-just-a-regular-day: The football team did this, school pictures are on that date, etc. But in my head I was hearing words that I've heard for six years during many other renditions of afternoon announcements - "I love each and every one of you," for example. Then he ended with the words I was whispering quietly to myself because I'd heard them so many times: "I hope you have a great Grizzly afternoon."

Those simple words reminded me of so many others, like the synchronized phone calls to my home phone: "Good evening. This is Mr. Johnson, your principal at the almighty Gravelly Hill Middle School" and his words to the students -"I love you before the standardized tests, and I'll love you after the standardized tests."

Although he's gone now, and his office is empty except for hooks on the wall that will hold someone else's family pictures and diplomas, there are so many words that will forever ring in my ears: "How will this get results?," "It's all about the kids," and, most importantly, "Once a Grizzly; Always a Grizzly."

Where were you when the world stopped turning that September day?
Teaching a class of innocent children.... Alan Jackson
I was standing in front of a middle school classroom on September 11, 2001, administering a standardized test. I can't for the life of me remember what test it was; I just remember the entire school was in testing mode - silent with students quietly bubbling.

I glanced up at the clock - 9:00 AM - and sighed; tests like that make the day move so slowly. Shortly after that, a teacher entered my room, breaking testing protocol: you don't walk in and out of each other's rooms during a school-wide test. He leaned in and whispered in my ear, "A plane has crashed into the World Trade Center." He tiptoed out and my thoughts were spinning - must be an accident...how could a commercial jet get off course like that...maybe it was a private plane...how awful.
October 1987
My friends and I visit New York and shop in the boutiques at the bottom of the Twin Towers. I stand outside and look up - it's breathtaking how tall those towers are. I wonder how they can remain standing and not just blow over in the wind. Some engineer is brilliant, I think.
April 1999
I help chaperone the Riverside High School Theatre Department's field trip to New York City and am excited to take one of those tourist ferry rides on the Hudson River. A full ten minutes of the ride consists of listening to the tour guide talk about the World Trade Center, and I click pictures of the Twin Towers from the water. It's a picture I'll dig through a box to find in the fall of 2001.
September 11, 2001
My students completed their tests, and I began to hear rumors - the other tower had been hit, the Pentagon, the Sears Tower, the White House...the stories continued up and down the middle school hallway. I felt uneasy but hid that from the students. Instead, I told them that something newsworthy, maybe history making, was going on, and we turned on my classroom radio. Since then I've thought about how different that day would've been with Facebook, Twitter, and my iPhone. Friends in front of televisions could have gotten me news much more quickly.
But in 2001, we depended on a little classroom radio. To my horror, the first thing we heard was the sound of bodies hitting the ground as victims jumped from the burning tower. I'll never forget my student Shiron looking at me that day and saying, "Mrs. Rigsbee, they're jumping." I turned off the radio just as the bell rang to dismiss class.
What followed was a day of chaos - teachers begging to leave and go pick up their own children from school (who knew where the terrorists would strike next?), students asking questions, staff receiving mixed messages about whether or not to discuss the happenings with children. Too late for me and my kids; we had already heard too much.
That afternoon all events were canceled: there would be no football practice, no meetings; we all went home and sat in front of televisions watching the coverage. I was horrified while watching coverage of the people walking the streets of New York City, holding up pictures of their loved ones, searching through devastation and debris. Some people were holding pictures of their pets - so much was lost that day.
The next morning I stood at my overhead projector and faced a silent class. Here's how I started: "Yesterday thousands of people got up, showered, shaved, brushed their teeth, and headed off to work, not knowing they wouldn't be returning home." Then I took my overhead pen and we did the math: "How many people do you think were on the planes that crashed?" I wrote their estimates down, and we added the number of people who may have been in the World Trade Center and the Pentagon. Our rough estimate was 2,000 who lost their lives. Little did we know we were off by almost 1,000.
The days that followed showed us a different reality. Security was heightened everywhere, even in schools. All outside doors began to be locked with the exception of the front door, a practice that continues to this day.
I remember, a few days later, standing outside of the school and hearing the hum of an airplane. I looked up and said to another teacher, "The planes are back." We had lived under empty skies for a full three days.
The seventh graders in my school today were two years old when our country changed. They don't even know a world without a Department of Homeland Security. Those who travel by air have never seen a time when they didn't have to put their liquids in a clear bag and take off their shoes to go through security. They've never known a time we haven't been at war.

This is, of course, an opportunity for all teachers to talk to children about what the world was like before that fateful day and about how changed we are.

And I wonder if somewhere, as we all tell our stories of where we were on September 11, 2001, my student Shiron is telling someone about the middle school classroom where he sat listening to a radio. There are so many things about that day I'll never forget...and Shiron sitting wide-eyed and looking to me for explanation is one of them.

Unfortunately, Shiron, the events of that day still defy explanation. 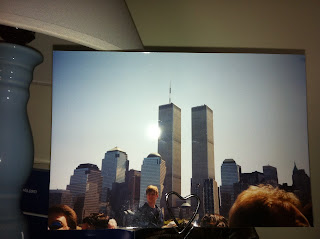 This picture of the Twin Towers was taken from a ferry boat in April 1999. It sits on my desk now, a reminder of a more innocent time.
Posted by Cindi Rigsbee at 9/10/2011 1 comment: