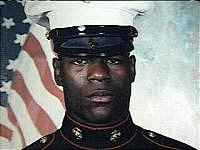 It's not spring. In fact, there's a "winter weather advisory" today. But I can see some buttercups outside my classroom window (William Wordsworth would say "a host of daffodils") and those mean spring. Every spring I begin having the same thoughts...thoughts of Brian....

It all began in 2001 when I sent an email to my stepdaughter, Heather, who had graduated from high school with Brian in 1996 and her husband, Chad, who was in the Marines at the time. It went like this:

Brian was in my seventh grade language arts class in the 1990-1991 school year. I had him 4th period. How do I remember that? Because I had the entire junior varsity football team 4th period! I told Letitia that on game days, the players would wear their jerseys to school, and the entire room would turn red.

Brian was a good-looking guy and a talented football player. Schoolwork was not his favorite activity, but he did it, knowing that I would talk to "coach" if he didn't. He did an average job on that work, but he played football like a hero...with a passion that most seventh graders haven't yet found. He was also polite and had a smile that never left his face. No matter how hard I was on him...for forgetting his homework, for talking about football instead of doing classwork, for begging me daily to take the class outside so the boys could throw a football around, he would sit and grin at me. On the days that he would wear me down, and we would go outside after lunch, he was a natural leader, breaking everyone into teams and calling plays.

Letitia broke into my thoughts, saying, "Brian is in the Marines now."

Do you know how that feels? Someone reaches into your memory, pulls out a seventh grader, and makes him a man.

Then I thought back to my 4th period class of 1991. There, in the back, looking bored, and counting down the minutes to the football game, sits Brian Anderson, future Marine.

In April of 2003 (the beginning of spring), I found a copy of that email and added the following:
Today I was given news that hit me straight in the gut. Brian, the Marine they wouldn't "break," was killed last Wednesday outside of the Iraqi city of Nasiriyah. I think of all the cliches - he loved what he was doing, everyone who knew him is proud, the world will be an emptier place without him, and so on.
But mostly, I think of that grin...and when I look back across that 4th period class, the last desk, in the middle row, is empty.
This will be our fifth spring without Brian Anderson. But I have learned something important. Now I look at my seventh graders not so much for the lanky legged, giggling kids they are now...but for what they will be someday.
Rest in Peace, Brian.
Posted by Cindi Rigsbee at 2/21/2008