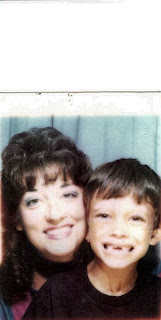 I realize, more than my children may think, that being a mom means being a Teacher of the Year every day for...hmmm...twenty six years so far for me. A mother is the ultimate teacher; I know because mine is still trying to teach me.

Me: I don't know, Mama, my air conditioning is just not working well.
Mama: Have you changed your filters lately?
Me: They have to be changed?!

I think about the things I've tried to teach my children along the way, and I think about the way they've turned out. I wonder if those two components (me teaching while they learn) meet anywhere in the same zip code. My stepdaughters, Heather and Erin, have turned into mothers themselves, and have adopted my opinion that there is no greater call. They adore their children as I adored mine, and they are doing the best they can for them just as I did. My daughter, Kelli, the 26 year old professional cheerleader, turned into a talented dancer somewhere between crawling on my dance studio floor when she was six months old, pointing to dust bunnies and saying, "Dir-do, dir-do" and being named a captain on the TopCats squad, cheerleaders for the Carolina Panthers.

But then there's Will. Is there any part of that boy that slightly resembles me? Can a mother actually teach a boy anything important? Our family has lamented on many occasions that poor Will barely had a chance in our house. First, he was the only male, at age three, living in a single parent home. Then, after the "family blending wedding," he was the only male, along with four women, when his stepdad was on 24 hour shifts at the fire station. We all remember "the attack of the bras" that scared Will to screams when he stepped out of the shower one night. The girls were just trying to dry some lingerie on the shower rod...

I always worried that I couldn't teach him well. I had a heck of a time with the potty training adventure. Then I struggled with anything hands-on. See, Will's hands-on required left handed emphasis, and mine required right. Try to teach a left hander to tie a shoe, snap a finger, swing a golf club - the list goes on and on. Will was the comedian, the class clown, the entertainment in our family (and in his classes, much to his teachers' dismay.)

Fast forward 24 years. Today I delivered my Wee Willie Winkie (runs through the town, upstairs and downstairs in his nightgown...Will's nickname when he was a baby) to a jet plane. He is now in the city, NYC, to continue to pursue his career in acting. His mother, the teacher, is not in fact an actor...unless you count the daily performances in front of seventh graders. His mother, the teacher, would NEVER move 500 miles from home to a big, scary place with nowhere to live and no substantial bank account.

But I did teach Will all about dreams. He knows that I believe in going after them, even if it means taking a few (many?) risks. Even if it means leaving everything you know to learn new things and meet new people.

In the car on the way to the airport, it hit me that Will and I may not be so different after all. As he blasted the radio so loudly I couldn't think...while excitedly sharing songs he loves that I've never heard of, I realized this: of all of my children, he's the one who gets the lyrics instead of just hearing the music.

I think of myself at 24. I was dancing and cheering like Kelli. I had already brought my first baby home from the hospital like Heather and Erin. But I had poetry inside of me like Will. I just chose to quietly put mine on paper while his is placed under a spotlight for thousands to see.