One of the joys of being the Teacher of the Year for the state of North Carolina is that I get to travel all over the place, making presentations, talking to educators, attending meetings, and representing teachers as an ambassador for education. Because of this amazing honor, I have a "state car" to drive from hither to yon, and it's a cute little Toyota Prius that is saving the state some gas money because it's so efficient. It was new when I picked it up, and it now has over 8,000 miles on it. That's about 2,000 miles per month so far. Those miles don't include any personal trips, which I don't make in the state car, even to the grocery store or bank. Those are all "Teacher of the Year" miles. 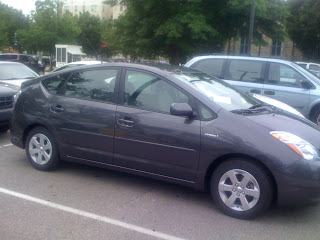 I knew ahead of time that it would be part of the job requirement to travel the state. I continue to be very excited about that. But it does look a little different than I imagined. First, I envisioned that my elderly Mama would accompany me on some trips. She's just sitting at home by herself so why couldn't she ride with me to the mountains, and while we're there, maybe we could mosey on in to a little craft shop, do a little browsing. Well, what I didn't anticipate is that my schedule is so packed that I literally am running from one event to the next, and shopping hasn't even been a gleam in my eye.
One thing I started out doing is taking the smaller back roads occasionally so that I could really see and enjoy my state. I soon noticed that I was chugging right along, glancing out the window, saying, "Oh, there's a horse. Pretty horse. Gotta go..." and I'd keep right on driving in order to get to my next destination in time.

I love my little car and have spent a good deal of time in it, but there was one traumatic situation. Once I was on the road to a school, and I saw two school buses coming toward me. I thought, "Awwww...school buses...I love school buses, I love schools, I love..." My next thought was "Why is that car in front of me swerving?" And then I saw it - a deer. No, not a prancing and beautiful trying-to-get-across-the-road deer, but a projectile deer. This animal had been hit by the bus and had been thrown at me. I hit it. But I don't know where or how. I don't know if I ran over it, or if it hit the side of my car. My eyes were closed. I slammed on brakes at precisely the same time I slammed my eyes shut. I heard "bump-bump-bump-bump" but to this day have no idea what happened. The buses stopped. Other cars stopped. The deputy said he didn't see any damage to my car. Just some fur. Great.

If you don't know me, you don't know that I'm the one who stops any time I see deer, even ones on the roadside. I stop, roll down my window, and yell, "Go away, little deer. Run in the woods! Be safe! Be safe!" That day I didn't have a chance (and neither did the deer.)

The most traumatic experience happened last week, though. I had a five hour drive through the rain to get from point A to point B. I was hungry and tired, having spoken to 350 people at lunchtime. My end destination, where I would speak to principals the next day, happened to be at the beach where peaceful ocean waters were waiting. But getting there was difficult. Upon leaving the biggest city in the state, I encountered red lights every 500 yards. There was an incessant stop-and-go that provoked me to the point of feeling less than pleasant toward the Department of Transportation. I finally broke free of that and found myself on a beautiful four lane highway with nary a car on it (except mine.) I continued to puttputtputt right along, probably at about 65 mph when I noticed a sign saying "Speed Limit 45."

I slowed down as any good driver would do. However, I was already in trouble and didn't even know it. You see my car has a nice 1-800 number on the back. I say the numbers are a good five inches tall, but my husband says they're only two. (I've told him a million times that I don't exaggerate.) Anyway, the next day I received a call and here's what I heard: "A citizen has filed a complaint against you." I was HORRIFIED! I really was. But all I could think about was the episode of The Andy Griffith Show where someone (maybe Barney) is yelling, "Citizen's Arrest! Citizen's Arrest!" I thought it must be some mistake, but when the caller named the city, I felt like the Von Trapp family trying to dodge those huge spotlights as I backed up to a concrete wall. Because, yes, I was there at the time indicated, and just maybe I was going a little fast. And, oh my gosh, I'm so sorry...I know I represent the teachers of North Carolina and the state in general, and I would never break a law.

Needless to say, after my presentation to the principals, I drove home like a Driver's Ed student - hands on 10 and 2, checking the mirror every three seconds, and setting the cruise control for five miles below the speed limit.

Now... there's really no time to stop and pet the horses. Which is fine with me...as long as they stay out of the road and away from school buses.
Posted by Cindi Rigsbee at 11/17/2008

It's actually Gomer who yells "Citizen's arrest" -- at least in the first instance. My favorite episode! Have you considered changing just one of the numerals in that 800-number?

Yes, I have received several emails containing that correction. I knew it couldn't be Barney - he's not a citizen! Thanks for the clarification...and I'm sorry Gomer!