Apples for the Teacher

My Superintendent and I were talking recently about our holiday break and our families. He was telling me about some relatives of his who have been in the spotlight recently. One was just crowned a pageant winner and will compete in the Miss USA Pageant this year. Her sister is a former teen pageant winner. Her other sister is a model who is engaged to an actor who can be seen on a current teen drama. He ended by telling me that the mother of these girls was in the Miss USA Pageant in 1982.

I was sitting in a parent conference with each of the core teachers on my team and Alton's mother. Alton, who was one of the brightest students I ever taught, as well as a talented and creative artist, was prone to unexpected outbursts of anger. One day, Alton asked for a pass to the restroom. I handed it to him and continued to monitor my class that was unusually quiet while taking a test. Alton opened the classroom door, took one step through the door frame and stopped. He turned, and in one fell swoop, ran across the room, pummeled another student in the head, then ran out the door and down the hall.
As we sat that day and discussed these behaviors with his mother, she sat quietly and listened. She finally said, "I've heard enough," stood up, and walked to the door. We sat at that classroom table, looking confused. Finally, she turned at the doorway, looked in our direction, and started screaming at a pitch that sent my hands to cover my ears and some folks in the hallway to the office for help. She resisted our attempts to calm her and screamed about the unfair treatment of her son for about three minutes before the principal came and escorted her out.
At that point our social studies teacher quietly whispered, "The apple doesn't fall far from the tree." I was a relatively young teacher at the time and hadn't heard that phrase before, but the little voice in my head has repeated it many times since.
One year I had a student named Christal. Christal was the loudest child I ever taught. Her normal speaking voice was decibels higher than anything I had ever heard, and when she came down the hallway to my class, she would swing her arms left to right over her head and yell, "Heeeyyyyy, Hoooooo, Heeeeyyyyy, Hooooo..." all the way to my room. I asked her nicely to be quieter. I modeled speaking quietly. Christal wouldn't budge. So I called her mom. I explained the situation into the phone and then jerked it away from my ear as fast as I could when she began yelling, "YEA, I KNOW CHRISTAL'S LOUD, BUT SHE GOT IT HONEST. HER GRANDMA IS LOUD, TOO!!!"

I politely thanked Christal's mother and hung up the phone. It's all about that apple.

Back in the 80's when I was young and in shape, I owned and operated a dance studio at night. Middle school during the day; dancing at night; I had loads of energy then. My daughter Kelli crawled around that studio as a baby and grew up there, dancing from the time she could walk. Now Kelli is a doctoral student and a professional dancer for the NFL who teaches a couple of classes at a dance studio in her spare time. Today she was telling me about her spring recital. There'll be an 80's theme, and I was thinking of some dances we used to do back when I was teaching - Flashdance, Thriller, anything by Janet Jackson or Madonna...

And I started thinking, wow...Kelli's doing exactly what I was doing at her age...

Then that little voice spoke up, loudly like Christal's mother - THE APPLE DOESN'T FALL TOO FAR FROM THE TREE!!!

Happy New Year, everyone! And have fun with all of your apples. They'll be sitting in your classrooms again next week. 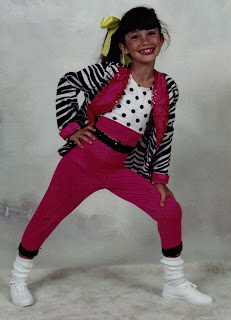 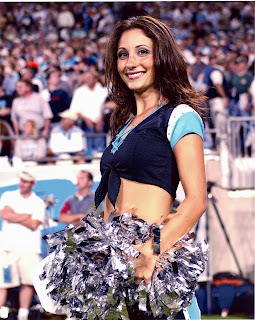 Happy New Year! I see my children in me all the time. Sometimes it is scary.