The Super Bowl is on - a huge event that's being broadcast all over the world. Last weekend I attended the Pro Bowl, another exciting football game where professional athletes were celebrated and honored.

I watched them on the practice field and during the game, paparazzi flashing, and tried to picture them all as seventh graders, the ages of my students. I thought about them before they became football heroes, before they earned million dollar salaries and bought million dollar houses. I thought of them as middle school football players, dragging their practice clothes around school in bags, like my students do, working hard to balance practices and school assignments (and sometimes not making that work at all.) 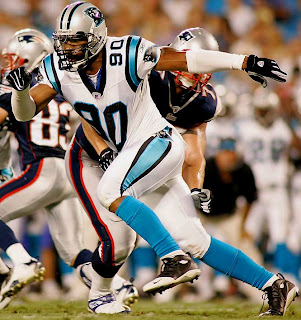 And then I thought of their teachers. They all had them. Julius Peppers, for example, a defensive end for the Carolina Panthers, made 18 million dollars last year. But once he was sitting in classrooms in smalltown Bailey, N.C. He probably had an elementary school art teacher, a middle school algebra teacher, and maybe a high school chemistry teacher. Kurt Warner, retired quarterback for the Arizona Cardinals, once looked shy at a school dance in Iowa, a middle school kid from an abusive family who beat the odds and made it big. He surely had a teacher, or several, who encouraged him to pursue his dreams, who pushed him to greatness.

It was at the Pro Bowl last week that I looked at all of those heroes on the field and thought of my own students. Who are the future professional athletes, scientists, soldiers, and even teachers sitting in my classroom every day? What words can I say that will make a difference in the direction their lives take?

It's a tremendous responsibility we have, as teachers, to say and do what needs to be done to ensure that our students go on to greatness.

My hope is that I say it tomorrow...and do it the next day...and say it again the next...what an amazing honor...

Hi Cindi! Thanks for visiting my blog! It's nice to "meet" you! I taught reading for two years - good for you. I'm sure you are making a BIG difference. Some days I get bored with the curriculum and question whether or not I'm where I need to be, but other days I am very blessed by the wobbly fourteen year old smiles and the eager hands in the air. The privilege of speaking into young lives is humbling, isn't it? I love Parker Palmer, too!