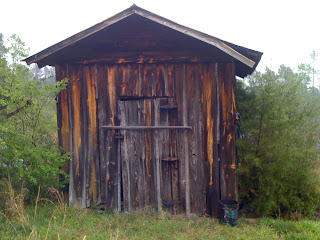 The Smokehouse at My Grandparents' Old Homeplace
In so many ways, we are who came before us. In many other ways, we are the antithesis of our ancestors, fighting to do better, have more, and be more than our parents and grandparents.

Today I sifted through artifacts (trinkets, my daughter called them) of my grandparents' life. In a house that was built during WWI, my brother, sister, husband, and I waded through the debris that takes over when a house has been abandoned by sickness and death...a house that previously had seen 100 years of Christmas-gift-opening laughter, 50 years of chicken dumplings and strawberry cakes served by my grandmother, 30 years of gathering around the piano to sing "Have a Little Talk with Jesus," countless years of living about to be demolished as new owners will soon clear the land to build a new home.

"Watch out for Tippy's grave," my brother told the buyer.

"Watch out for my memories," I thought.

In the summers of my childhood, when other kids were packing up for camp, I was sent to my grandparents' house. I dreaded it with all the fervor my young self could muster: as a child I thought the country was undoubtedly the most boring place on earth! My grandmother went to bed at 7 PM...and we may as well have been in bed: there was certainly nothing to do there, and by the way, it was darker in the country than any individual from the city could imagine! They didn't believe in lights there. I thought all those old-timey years with candles ruined them - they were so impressed with inside electricity that lighting outside would seem an indulgence.

So I spent those weeks in the summer scared senseless at night, lying awake with bulging eyes because no kid in America could possibly be asleep at that hour, and no kid should have to lie awake and listen to sounds that don't include interstate traffic.

Occasionally, I was scared senseless during the day, too. I was awakened every morning to the crow of a rooster (does anyone really think that screech is a pleasant sound?) The other daybreak sound in the North Carolina Sandhills is that of a Mourning Dove - those "who-who-who's" are still ingrained in my audio memory and remind me of missing my parents during those summer trips.

Once I woke up with an ax-wielding Granny standing over me. My grandmother needed help with a classic country chore - chopping the head off a chicken. I was pronounced the "holder of the chicken." I had a problem with this job on many levels, none the least of which was that Grandma the Chicken Slayer could possibly miss and chop my hand off. Also, I love all living things, and to this day can't even step on a spider in my house, preferring instead to hoist him onto a paper towel and deliver him outside. So poultry-cide certainly proved unpleasant to me. And, by the way, chickens DO run like, well, a chicken with its head cut off...in a circle...all over the yard. Note the post traumatic stress here!

I was also traumatized by the lack of conveniences out there in my Granny's sticks! She didn't have indoor plumbing until I was married and had my own children. I was pretty sure that there were creatures that had not been identified in the abyss that was the bottom of the outhouse. Sometimes I was brave enough to look down there in that hole, but there was nothing discernable - only darkness forever and ever. The fear still lurches in the pit of my stomach today when I think of the child abuse that was going on when Granny made me sit on that hole.

All that aside, I have other memories of my childhood summer place that aren't so traumatic. When I was eight, my grandmother's friend loaded my cousins, my sister, and me into the back of a pickup truck and took us to see The Sound of Music in the movie theatre on the day it was released in that small Southern town in 1965. I remember the bumpy truck ride over rural dirt roads every time I see the movie replayed.

How many folks have played in the top of a hayloft, jumping to the bottom floor of the barn (but not getting hurt because of the hay mattress that lay below)? Who's picked blackberries from vines beside the garden, only to be eating warm cobbler thirty minutes later? Gathered chicken eggs out from under squawking hens? Watched kittens emerge from a little hole in the stable door just as they're able to walk? Seen neighbors walk up the driveway with fresh baked goods to share? Snapped beans on a country porch for hours while swatting gnats? Taken a ride on a mule-drawn plow through rows and rows of cornfields? Who's banged on a piano, displaying no talent at all, but yelling, "You like my song, Granddaddy?!" only to hear, "It's beautiful!" shouted in from the other room? (Nothing to DO in the country? Boy, was I wrong...)

Today my mother pointed out flowers around my grandparents' yard and house. "Just dig up a few, and we'll replant them at home. I want the Seven Sisters roses and the purple and gold irises."

I reminded her that we gathered bunches of irises during our last visit. They're blooming in my yard now. "Well, get me some of that Sweet Bubby Bush then."

Soon we drove away and began our long journey home. For miles I could hear my Granny playing the piano; I could taste her dumplings and home-canned green beans. I could feel crafts between my fingers, the ones I made every summer at Vacation Bible School at the Bright Light Baptist Church. I could feel the rough wood of my Granddaddy's plow.

I arrived home with a sense of homesickness - I walked outside to shake it off....homesickness at home - such an oxymoron.

I walked across the backyard with my dog and caught a flash of color.

I turned and saw the purple and gold of my grandmother's irises, transplanted to the city like me, blowing in the wind.
Posted by Cindi Rigsbee at 4/23/2011

What a powerful "I am from..." piece, full of rich images.

I grew up in a moderately large city in NC in the 60s but had aunts and uncles living in the country. I didn't spend as much time out there as you did, but your writing makes me wish I had. This brought tears to my eyes.